In this Case Study module we will discuss three key aspects of understanding a real-life Mergers & Acquisitions (M&A) deal:

We will take a deep look into the large M&A deal that took place in the eCommerce sector. In November 2009, Amazon, Inc. completed a previously announced acquisition of Zappos.com, Inc. Under the terms of the deal, Amazon paid Zappos.com’s shareholders approximately 10 million shares of Amazon stock (valued at $807 million at time the deal was announced) and $40 million in cash. The M&A deal was advised by investment banking teams at Morgan Stanley (Zappos) and Lazard (Amazon).

Amazon.com is a customer-centric company for three kinds of customers: consumers, sellers and enterprises. The Company serves consumers through its retail websites, and focus on selection, price, and convenience. It also provides easy-to-use functionality, fulfillment and customer service. Amazon is the largest online retailer in the nation, with revenues exceeding $45 billion annually.

Zappos.com was the #1 online seller of shoes at the time of the deal, stressing customer service. It stocks 3 million pairs of shoes, handbags, apparel and accessories, specializing in some 1,000 brands that are difficult to find in mainstream shopping malls. Through its website (and 7,000 affiliate partners), Zappos.com distributes stylish and moderately priced footwear to frustrated and shop-worn customers nationwide. In 2008, one year prior to the deal, Zappos reported annual revenues exceeding $630 million.

The following graphic illustrates the timeline of Amazon’s acquisition of Zappos, from the birth of the possible transaction until the deal’s closing: 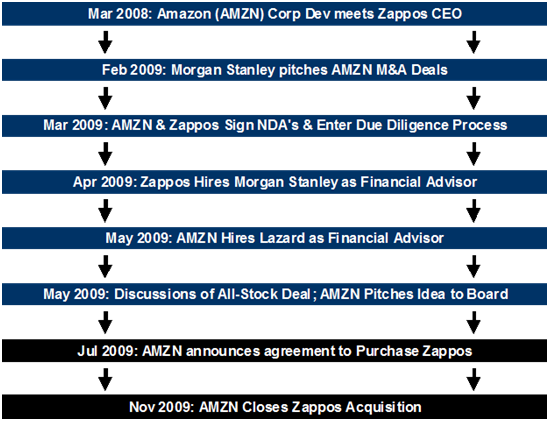 M&A Deal Announced: In July 2009, Amazon announced that it had reached an agreement to acquire Zappos in a deal that was valued at $847 million. The Purchase Price of the deal was financed with approximately 10 million shares of Amazon common stock and $40 million of Cash and Restricted Stock units on the balance sheet.

M&A Deal Closed: In November 2009, Amazon announced that it had closed the previously announced acquisition of Zappos. Given the closing price of Amazon stock on the previous Friday (October 30, 2009), the deal was valued at approximately $1.2 billion (including fees).

Two investment banks are enrolled in the merger process. In April 2009, Zappos formally engaged Morgan Stanley as its lead financial advisor to a possible sale or strategic relationship. Throughout April, Lazard met with Amazon and ultimately became the buy-side advisor for the transaction.

Rationale for the Deal

Shortly after the deal was announced, Amazon filed an S-4 registration document with the SEC detailing the rationale of both parties for undertaking the deal. Their reasoning was as follows:

For the analysis, Morgan Stanley looked at trading multiples in the eCommerce space for two key metrics of earnings: forward EBITDA (the ratio of Enterprise Value to next year’s expected Earnings Before Interest, Taxes, Depreciation & Amortization, or EBITDA) and forward Earnings (ratio of Equity Value to next year’s expected Net Income). Based on consensus estimates for calendar years 2009 and 2010, Morgan Stanley applied these ranges to the relevant Zappos financials.

Morgan Stanley also calculated Equity Value ranges for Zappos based on Discounted Cash Flow (DCF) analysis. DCF models are often used in Investment Banking deals to value a company or asset using the time value of money concept. Expected future cash flows are discounted back to today to give the Net Present Value of those cash flows, which should approximate the current value of the underlying company or asset.

Components used in a DCF Analysis

Morgan Stanley calculated a Terminal Value as of July 1, 2019 by applying a Perpetual Growth Rate range of 3-4% and a Discount Rate range of 12.5-17.5%. The projected Free Cash Flows (unlevered), Discount Rates, and implied Terminal Value were then used to solve for the Net Present Value of Zappos’ expected future cash flows. Based on the DCF projections, Morgan Stanley implied a Zappos Equity Value range of $1,555-2,785 million. The lower end of the sensitivity analysis implied a Zappos Equity Value of $430 million, so the deal value was within the sensitivity range.

As part of the due-diligence process, Morgan Stanley also performed a Precedent Transaction Analysis to imply a value for the company using recent historical M&A transactions of similar companies. Precedent Transaction Analysis is based on the idea that recently acquired companies with similar characteristics should provide a solid guideline for a reasonable Purchase Price for the given Target company (in this case, Zappos).

Morgan Stanley researched publicly available M&A transactions looking at deal multiples in the Internet sector with a buyout of $250 million or more since January 2008. The following is a list of the transactions that Morgan Stanley analyzed:

The table below shows Morgan Stanley’s analysis of stock price performance for these selected metrics:

Morgan Stanley then looked at recent trading multiples compared to next-twelve-months (NTM) Earnings Per Share and NTM EBITDA, as well as implied stock prices using these multiples, based on current NTM financials for Amazon. Morgan Stanley commented that over the period Amazon stock traded at an NTM Price/Earnings multiple range of 21.9-94.4x and an NTM EBITDA range of 8.2-32.5x.