In this Discounted Cash Flow chapter, we will cover four key topics:

DCF is a direct valuation technique that values a company by projecting its future cash flows and then using the Net Present Value (NPV) method to value those cash flows. In a DCF analysis, the cash flows are projected by using a series of assumptions about how the business will perform in the future, and then forecasting how this business performance translates into the cash flow generated by the business—the one thing investors care the most about.

NPV is simply a mathematical technique for translating each of these projected annual cash flow amounts into today-equivalent amounts so that each year’s projected cash flows can be summed up in comparable, current-dollar amounts.

DCF should be used in many cases because it attempts to measure the value created by a business directly and precisely. It is thus the most theoretically correct valuation method available: the value of a firm ultimately derives from the inherent value of its future cash flows to its stakeholders.

DCF is probably the most broadly used valuation technique, simply because of its theoretical underpinnings and its ability to be used in almost all scenarios. DCF is used by Investment Bankers, Internal Corporate Finance and Business Development professionals, and Academics.

However, DCF is fraught with potential perils. The valuation obtained is very sensitive to a large number of assumptions/forecasts, and can therefore vary over a wide range. If even one key assumption is off significantly, it can lead to a wildly different valuation. This is quite possible, given that DCF involves predicting future events (forecasting), and even the best forecasters will generally be off by some amount. This leads to the concept of “Garbage in = Garbage Out”—if wrong assumptions are made, the result will be wrong.

Additionally, DCF does not take into account any market-related valuation information, such as the valuations of comparable companies, as a “sanity check” on its valuation outputs. Therefore, DCF should generally only be done alongside other valuation techniques, lest a questionable assumption or two lead to a result that is substantially different from what market forces are indicating.

When doing a DCF analysis, a useful checklist of things to do has a mnemonic that is easy to remember: “C.V.S.”

Note that the “C.V.S.” acronym for Comparable Companies Analysis, discussed in the previous chapter, is slightly different (in that acronym, “S” stands for “Select” rather than “Sensitize.”)

When performing a DCF analysis, a series of assumptions and projections will need to be made. Ultimately, all of these inputs will boil down to three main components that drive the valuation result from a DCF analysis.

The DCF valuation of the business is simply equal to the sum of the discounted projected Free Cash Flow amounts, plus the discounted Terminal Value amount.

There is no exact answer for deriving Free Cash Flow projections. The key is to be diligent when making the assumptions needed to derive these projections, and where uncertain, use valuation technique guidelines to  guide your thinking (some examples of this are discussed later in the chapter). It is very easy to increase or decrease the valuation from a DCF substantially by changing the assumptions, which is why it is so important to be thoughtful when specifying the inputs.

The Discount Rate is usually determined as a function of prevailing market (or known) required rates of return for Debt and Equity, as well as the split between outstanding Debt and Equity in the company’s capital structure. These required rates of return (or discount rates or “costs of capital”) are generally then blended into a single discount rate for the Free Cash Flows of the company as a whole—this is known as the Weighted Average Cost of Capital (WACC). We will discuss WACC calculations in detail later in this chapter.

Terminal Value is the value of the business that derives from Cash flows generated after the year-by-year projection period. It is determined as a function of the Cash flows generated in the final projection period, plus an assumed permanent growth rate for those cash flows, plus an assumed discount rate (or exit multiple). More is discussed on calculating Terminal Value later in this chapter.

There are two ways of projecting a company’s Free Cash Flow (FCF): on an unlevered basis, or on a levered basis.

By comparison, a Levered DCF involves the following steps:

Which is more sensitive part of a DCF model: Free Cash Flows or Discount Rate?

FCF (and Terminal Value, which uses FCF as an input) are the more sensitive. Be careful, therefore, when making key Cash flow projection assumptions, because a small ‘tweak’ may result in a large valuation change. The analyst should test several reasonable assumption scenarios to derive a reasonable valuation range. Within FCF projections, the best items to test include Sales growth and assumed margins (Gross Margin, Operating/EBIT margin, EBITDA margin, and Net Income margin). Also, sensitivity analysis should be conducted on the Discount Rate (WACC) used.

Avoid these common pitfalls when building a DCF Model:

Here is a graphical representation of these DCF Steps:

In order to project a company’s future Cash flows reasonably well, the analyst will need to take into account as much known information about the company (and several market metrics) as possible. The following sources can help provide needed information to produce a high-quality DCF analysis:

In projecting Free Cash Flow for a business, remember “C.V.S.”, and that Garbage In = Garbage Out:

Free Cash Flow (FCF) is calculated by taking the Operating Income (EBIT) for a business, minus its Taxes, plus Depreciation & Amortization, minus the Change in Operating Working Capital, and minus the company’s Capital Expenditures for the year. This derives a much more accurate representation of the Cash that a company generates than does pure Net Income: 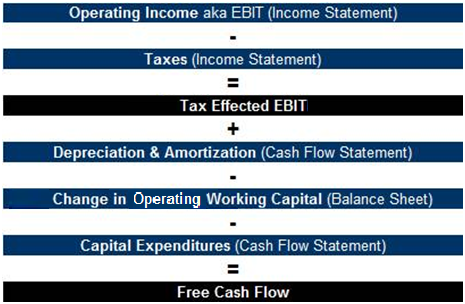 The projected FCF in the nearest-out years (Year 1, Year 2, etc.) will have the most impact on a company’s DCF valuation. The good news is that these Cash flow figures are the least difficult to project, because the closer we are to an event, the more visibility we have about that event. (The bad news, of course, is that any error in projecting these figures will have a large impact on the output of the analysis.)

FCF is derived by projecting the line items of the Income Statement (and often Balance Sheet) for a company, line by line. As a result, the FCF results are sensitive to a variety of assumptions about the future operations of the company’s business, including the following:

Remember “C.V.S.” when projecting all of these items. The assumptions driving these projections are critical to the credibility of the output.

As mentioned, we first project the company’s Income Statement. Below, we will walk you through a simple example of how to do this.

Depreciation is a non-Cash expense, meaning the company books Depreciation as an expense on the income statement for GAAP (Generally Accepted Accounting Principles) purposes but in reality, no Cash was actually spent. It is an expense of Capital Expenditures made in prior years. Therefore, in order to calculate true “Cash flow,” this must be added this back. Similarly, CapEx must be subtracted out, because it does not appear in the Income Statement, but it is an actual Cash expense.

It should be noted that Amortization acts in much the same way as Depreciation, but is used to expense non-Fixed Assets rather than Fixed Assets. An example of this would be Amortization on the value of a patent purchased when acquiring a company that owned it.

The next step is to take our business performance projections and calculate Unlevered FCF (UFCF) in each year:

Now we can apply the formula:

We have now projected the expected Unlevered Free Cash Flows (UFCF) in each of the upcoming years. However, to value the company, we have to discount those cash flows into equivalent current (today’s) dollars. This is where Net Present Value (NPV) comes in.

The formula for calculating Present Value (PV) is as follows:

In this formula, the PV is equal to the FCF in each year (Year 1, Year 2, Year 3, etc.), divided by a discount factor. In each case, the discount factor is 1 + the discount rate (r), taken to the nth power, where n is the number of years into the future that the Cash flow is occurring (similar to the compounding of an annual interest rate).

We will go into more detail on determining the discount rate, r, in the WACC section of this chapter.

The Terminal Value is based on the cash flows of the business in a normalized environment. What this means is that the business should be assumed, after the projection period, to grow at a rate that is appropriate for a business of its type at the end of the projection period, and/or to be valued at multiples consistent with those of its peers (see the chapter on Comparable Companies Analysis earlier in this training course).

There are two primary methods to compute a company’s terminal value:

As a sanity check, you can use the terminal method to back into an assumed growth rate for the business, which should be similar to the growth rate used in the perpetuity method. Examples of this calculation are discussed later in this section.

Continuing with our DCF example from earlier, we will demonstrate the two steps needed to apply the Terminal Multiple Method:

Here are a couple of important considerations to make when using the Terminal Multiple Method:

The Perpetuity Method uses the assumption that the Free Cash Flows grow at a constant rate in perpetuity over the given time period. You should use a conservative approach when estimating growth rates in perpetuity. Analysts typically use long-term growth rates such as GDP growth (or perhaps something slightly higher), as companies typically can’t register double digit FCF growth rates forever.

Here are the two steps needed to apply the Perpetuity Method:

If we assume that WACC = 11% and that the appropriate long-term growth rate is 1%, we get:

This is a very conservative long-term growth rate, and of course higher assumed growth rates will lead to higher Terminal Value amounts.

Note that there are formulas to determine the equivalent multiples and growth rates for the two given methods.

These definitions refer to two sides of the same coin. If an investor requires a specific return on his investment dollars today, then future cash flows from an investment he makes can be converted into today’s dollars using that required return to create a “today-equivalent” value for those future cash flows. (The WACC simply does this for all investors in a company, weighted by their relative size.) Since the future FCF represent all of the value of a company available to all investors (Debt and Equity) in the company, they can be discounted by WACC to determine their value in today’s dollars.

But how do we determine what that required return should be? Put simply, it is a function of the alternative investment opportunities available to all of the investors in the company, and the riskiness of making that investment in the company relative to those available alternative returns. If the risk-equivalent return in other opportunities is X% per year, then an investor should require X% from this investment as well. And in order to gauge the current value of the investment in today’s dollars, we need to discount all future benefits accruing to those investors (namely, future Cash flows) by X%.

Here is a summary of things to make sure you understand about the WACC:

Now that we have described WACC and what it represents fully, here is the mathematical definition of WACC:

Here is an example that illustrates the calculation of WACC for our hypothetical company, using the average adjusted (levered) beta for a sample of hypothetical, comparable companies: 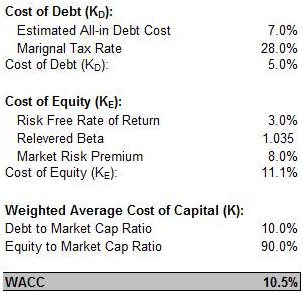