Introduction on 13F Filings: Registered hedge funds over $100 million are required by the Securities and Exchange Commission (SEC) to file quarterly updates on portfolio holdings.  These holdings are filed online through form 13-F at sec.gov.  Hedge funds are required to file these holdings no later than 45 days after the end of the calendar quarter.  The Street of Walls team compiled very detailed analyses on 20 of the top Hedge Funds in the industry. This report focuses on hedge fund positions at the start of 3Q 2011 and looks at meaningful changes from the previous quarter. The report is based on 20 of the top hedge funds. NEW Position Heat Map: During 2Q11, the top 20 hedge funds entered many new positions. The Heat Map below identifies the top NEW positions added during the quarter. NEW names were not previously held in 1Q11. Tickers in Red represent common or “crowded” positions. The most crowded new ideas during the quarter were GOOG, MOS, YOKU, BP, and SUG.  Other new positions shared among hedge funds but with less overlap were MRO, AMT, EXPE, STX, RAH, THC, GCVRZ, YNDX, and NWSA. 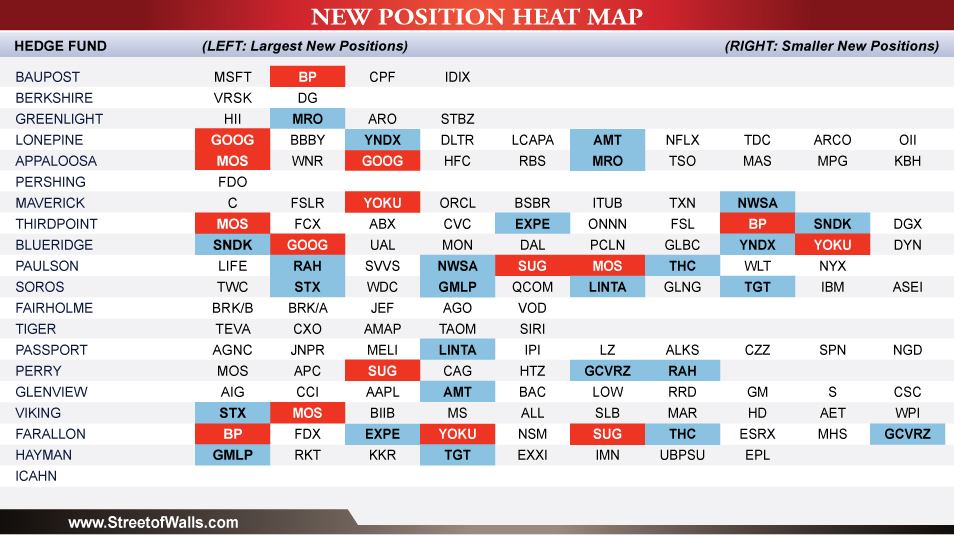 Crowdedness Among Existing Positions: Below we break-down the most shared stocks held in at the top 20 hedge funds. Crowded trades can lead to higher than normal share price volatility. We examined the number of positions that were shared among our hedge fund universe, giving us an understanding of how the herd is acting. For the top 20 hedge funds we cover, the most crowded books were from Glenview, Maverick, Viking, Appaloosa, and Lone Pine (lots of Tiger Cubs in there).   The least crowded positions among the books were held at Soros, Baupost, Fairholme, and Third Point. Below are the top 8 positions held at each fund, followed by the amount overlap at other hedge funds.  For example, NWSA is Baupost’s second largest position and is owned by 4 other hedge funds we cover. 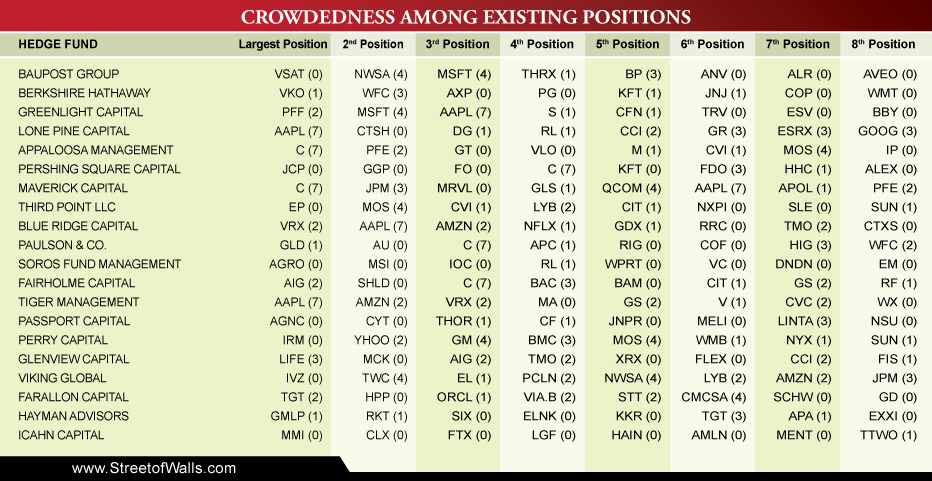 Hedge Fund Sector Changes: There was a big push within the quarter to Information Technology (+1.9%), Industrials (+1.1%), and Consumer Discretionary (+0.8%) while Healthcare (-1.5%) declined the most. Fund managers may have found opportunity within the technology sector as valuations soared higher, while government reimbursement risks associated with the Healthcare sector may have led managers to trim and exit positions within that space. 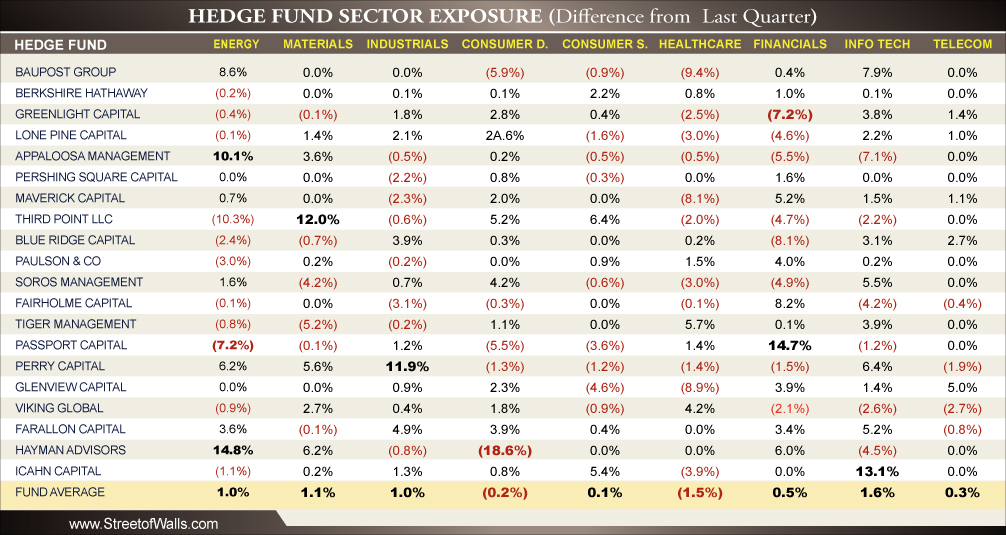 Hedge Fund Investment Characteristics: Out of the 20 hedge fund examined, Financials was the leading sector for investment in 2Q11 (as a % of sector investments from last quarter) followed by Information Technology then Energy. The average market capitalization of hedge fund portfolio companies was $24.6 billion. Fairholme and Tiger Management had the highest market cap exposure while Icahn and Hayman Advisors had the lowest market cap exposure. On average the funds listed below bought companies with a 2011 forward price to earnings ratio of 13.8x.  Pershing Square and Baupost bought into the higher valuation stocks at 19.8x and 16.9x respectively while Paulson and Glenview bought into much lower valuations at 11.3x and 10.6x respectively. Short interest as a percentage of publicly traded floating shares was an average of 5.1% across the 20 funds.  Perry Capital and Soros had the highest short interest with 10.1% and 7.2% while Viking and Farallon Capital had the lowest with 2.8% and 3.2%. Owning stocks with high short interest is a sign of contrarian investing. 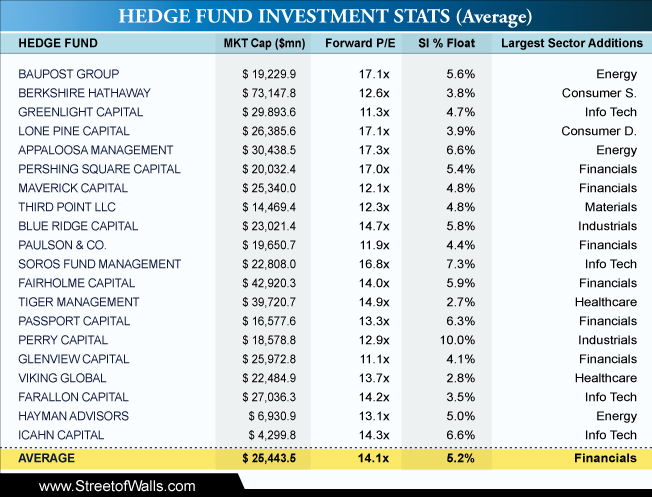 Sign up for the 3Q11 report today (will not spam):

Check out the entire FREE report